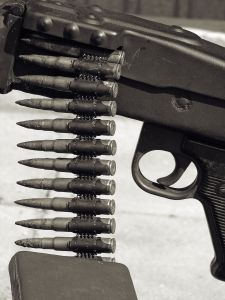 With more than 2.6 million troops having been deployed to Afghanistan and Iraq in recent years, it’s been estimated that up to 20 percent may suffer from post-traumatic stress disorder.

Castle Rock criminal defense attorneys know that symptoms of this disorder can manifest in many ways, including criminal conduct. We may see it in the form of domestic violence, as soldiers act out against those closest to them, or in the form of DUI or drug abuse, as they seek to self-medicate their condition.

In Colorado Springs, a soldier is accused of killing another man outside a motorcycle club in March. He has pleaded not guilty to charges of first-degree murder and aggravated robbery, and it’s expected that his defense attorneys will argue that he suffers from war-related brain injuries and PTSD.

He and two other soldiers, as well as two other men, are accused of crouching behind trash cans and ambushing a vehicle that was passing by. The victim had earlier been attacked by a group of men at the club, and was returning to get his wallet.

Cases of soldiers employing PTSD as a defense are likely to increase as more soldiers return home. The U.S. Veteran’s Affairs Office estimates that roughly 170,000 soldiers returning from tours in Iraq and Afghanistan have been diagnosed. That leaves many more who have yet to be diagnosed.

The Los Angeles Times reports that thousands of veterans who are accused of non-violent crimes have had their sentences reduced or charges dismissed after they have cited PTSD as a factor in their actions. The goal of the courts is often to send the offender to treatment and counseling programs, rather than to prison.

Violent offenders have had limited success with this defense, though it is true that those who suffer from PTSD don’t have the same kind of brakes that the rest of us do. A skilled attorney can argue this to a judge or jury, and may be able to make a successful case for reduction or dismissal of charges.