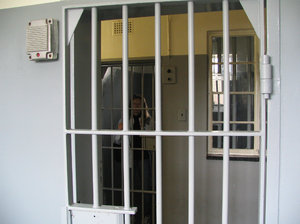 A man who reportedly shot a police officer was convicted on several Castle Rock felony charges, and ultimately sentenced to 111 years in prison.

Our Castle Rock criminal defense attorneys recognize that attempted murder and aggravated assault charges can net serious penalties. Having an experienced attorney at your side when you’re facing these type of allegations can make all the difference in the outcome of your case.

A short struggle ensued, after which time the suspect reportedly left. The first officer to encounter him pulled him over in front of the high school. In a flash, prosecutors said, the suspect fired off more than a dozen round at the squad car, striking the officer in the shoulder.

The officer reportedly fired back, striking the suspect twice and causing life-threatening injuries.

The suspect survived, and was charged with attempted murder with extreme indifference, aggravated assault and DUI.

His Castle Rock defense attorney had argued that the suspect had not intended to harm the officer, only to have him return fire. He was aiming for a “suicide by cop,” and as the attorney pointed out, he was almost successful. In fact, a paramedic was brought in to testify that the suspect had pleaded with paramedics to simply let him die.

Other character witnesses were brought in to talk about the defendant’s substance abuse problems, as well as the kind of person he is at the core.

Prosecutors, though, worked to paint a different picture. They mentioned other violent incidents that had occurred in the defendant’s recent past.

Despite the defendant’s apology, the judge still handed down a harsh sentence.

While our Castle Rock criminal defense attorneys realize that judges and the general public tend to take assaults against officers very seriously, there are strategies that can be employed that can help to reduce your penalties.

If you are arrested for a felony in Castle Rock, contact our Castle Rock defense attorneys to assist with your case.